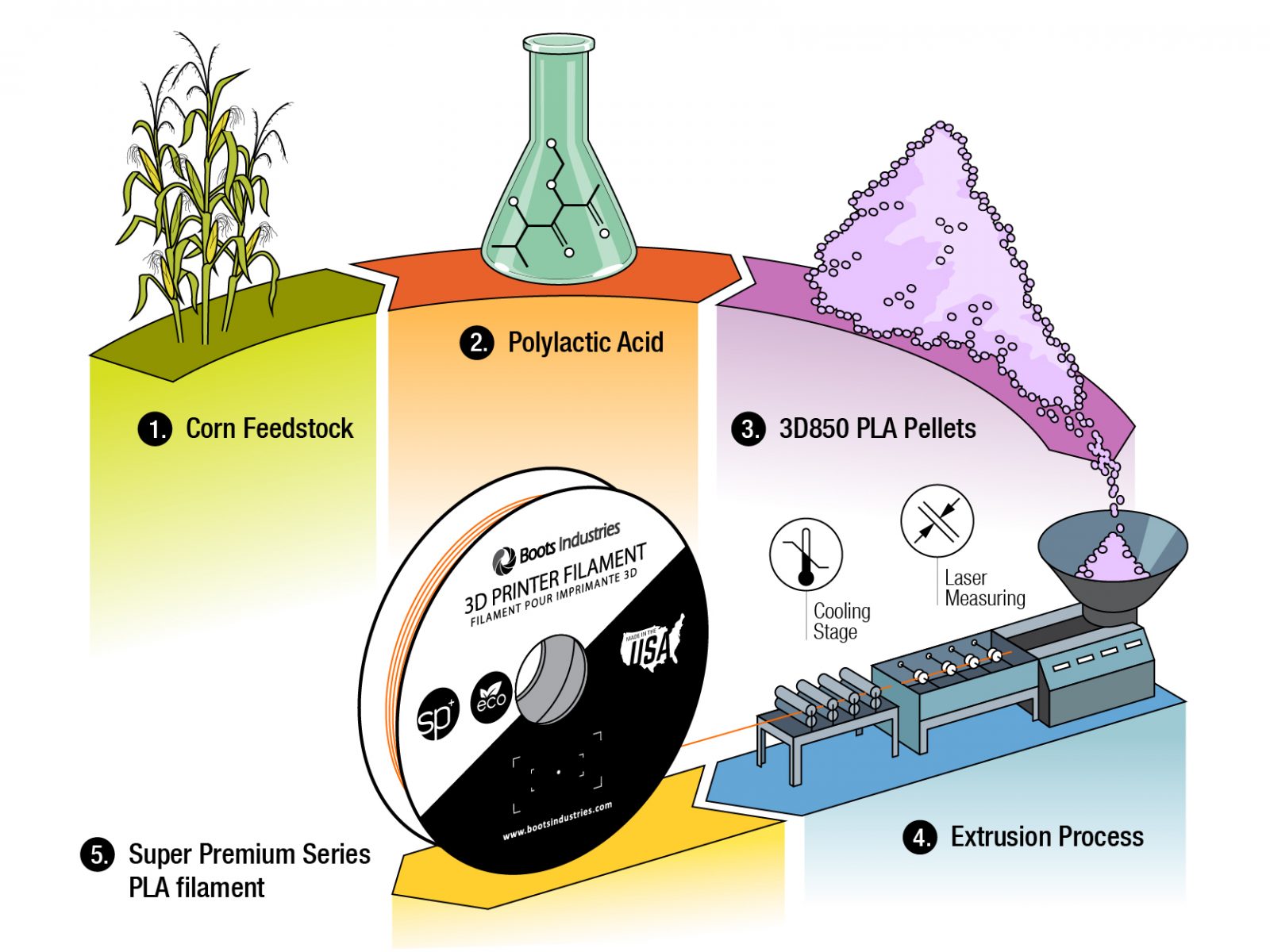 In this short article, we’ll cover some fundamentals about PLA filament manufacturing and NatureWorks’ 3D850 resin. 3D850 refers to the PLA resin grade used in the production of our Super Premium Series filaments. All our Super Premium Series PLA filaments on offer contain ~98% 3D850 PLA resin with up to 2% of 3052D resin as a pigment carrier. Since PLA filaments are quickly becoming the most popular 3D printing material on the market, we wanted to discuss why our materials outperform the competition. PLA’s popularity stems from the fact that it’s easy to print, doesn’t create any bad odours and is environmentally friendly. However, generic PLA formulations are not without drawbacks, and we’ll do our best to explain the essential differences. In general, PLA formulations found in the marketplace exhibit low heat distortion temperatures, high coefficient of friction and low melt flow index. These attributes translate into rigid and more delicate 3D printed parts that are harder to extrude and can easily fracture. To overcome some of these PLA issues and improve 3D printing performance, NatureWorks took its years of experience in the polymer manufacturing business and formulated the Ingeo 3D850 PLA resin. We’re taking the lead by offering this premium resin to our customers.

Introduction to the PLA Manufacturing Process

First, let’s start by discussing the chemical process NatureWorks uses to create the Ingeo line of PLA resins. The initial step in this process involves harvesting corn and extracting its starch through a wet-milling process. Suitable starches are also harvested from other agricultural sources such as sugarcane. However, corn being a common starch source in North America it’s used most of the time.

The next step in the process involves heating the starch with enzymes to hydrolyze it into dextrose (D-glucose). Once the dextrose is formed through hydrolysis, the material is harvested and subjected to microorganisms in a fermentation vat to convert it into lactic acid. This lactic acid is then refined through a two-step (or more) process that forms rings of lactide. It’s these lactide rings that open up and polymerise to form long chains of polylactic acid (PLA).

The last manufacturing step forms PLA into pellets that are later used to extrude 3D printer filament. As shown below, it’s important to note that the entire process as implemented at Natureworks has a very low carbon emission when compared to other material creation processes.

Now let’s look at the characteristics that NatureWorks has enhanced in its line of 3D850 PLA resin. The first thing to notice is that 3D850’s melt flow index is higher than that of standard PLA or ABS. In the material properties table shown below, we present typical values associated with ABS and PLA from a renowned Chinese manufacturer (ESUN) and compare them to 3D850’s properties. First, we see that the melt flow index of ABS and PLA filament from China is reported as 1.5 g/10 min and 7.8 g/10 min, as compared to 9 g/10 min for 3D850. A high melt flow index is often indicative of a lower coefficient of friction. This high melt flow index thus yields an advantage because extruder motors have to do less work to extrude the same length of filament (print faster). Also, a higher melt flow index leads to a cooler extruder operating temperatures and less wear on parts. Another advantage is a lowered probability of extruder gear slippage or stripping of the filament when back pressure occurs in the hot end.

So what does having a high flexural modulus mean for 3D printing? Printing structures that are long and thin will have less deflection or bend under pressure, thus eliminating the need for supports or thick rafts.

One of the biggest issues with PLA is its low heat deflection temperature or heat distortion temperature also known as HDT. HDT is the temperature at which a polymer or plastic will deform under pressure. Historically, when printing parts requiring high resistance to temperature, ABS was the best material. Nowadays, 3D850’s HDT is a whopping 144°C which means it will suffer minute deformation (if any) below that temperature. When compared to typical ABS and PLA having HDT values of 85°C and 50°C respectively, heat resistance is much improved.

From a usage perspective, filaments made with 3D850 resin feature other enhancements such as excellent bonding with print surfaces, a feature that is significantly improving first layer quality and minimizing the risk of warping. Next, shrinkage of parts during and after printing is also non-existent and virtually no odor is present during extrusion.

Because NatureWorks Ingeo 3D850 has taken on the best characteristics of various materials such as high heat resistance and high tensile strength, PLA will no longer have limitations in certain markets and industries. With improvements in materials technology and better processing techniques, Boots Industries delivers a Super Premium Series filament that surpasses most 3D printer filaments currently available. Ultimately, 3D850 shows that the trade-off between tensile strength for impact resistance can be avoided to yield high impact and high tensile strength PLA parts. Our Super Premium Series PLA filament are designed to offer tough and heat resistant parts analogous to ABS, but without any of the disadvantages.